For a very long time
the Stitch Club has given a lot of much needed distraction and fun
to textile loving people all over the world :
a new warm community has been formed during that time.

Some workshops were more fun than others :
and not everyone likes the same things, thank heaven
it would be a monotonous world  haha !

The last workshop so far
the second one by Mandy Pattullo
was one that I saw on her blog, but could never follow :
birds made of textile collages !
This was one of the few workshops that almost everybody LOVED ! 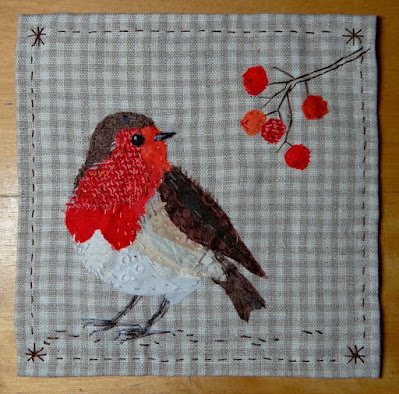 I use this robin to wish you all,
wherever you are,
lovely (but most probably very QUIET) holidays
and all the best for the new year

The year is rapidly coming to a close now.
Though normally December is a month of festivities
everything is just a bit stranger now.

And also Christmas will be under the same rules,
because LOCKDOWN has hit us again
since last Tuesday !
This strange Corona / Covid year
makes everybody uncomfortable
but thank heaven we're all healthy in our little circle !

The one and only "constant"
is the Stitch Club !!!

Jennifer Collier and Richard McVetis
were the last two.

For Jennifer we made a glove out of paper.
No, one is not able to wear a glove like that :
it's just a decorative item. 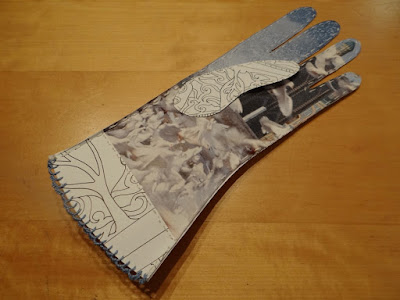 I didn't use the pattern that was given,
but traced my own hand.
The paper I used came from a Owfam / Novib calendar :
such beautiful photos to choose from.
And besides that the paper it strong enough to stitch through !
The back and thumb were from a page of one of Man's
colouring books  (one he didn't like very much  ;-)  !)
On the edge came some special lacy stitch
not easy but it worked out in the end. 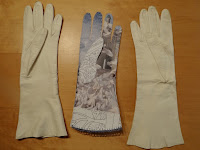 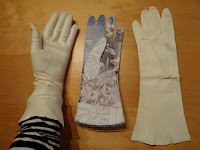 Some weeks ago I had found my old wedding gloves,
still pristine, because used only one day, hahaha !
I had to make an effort to put them on :
my arthritis hands are not the same size as they once were !!!

For the workshop of Richard McVetis
I had to find a photo and simplify and trace it.
Richards used architecture
but any other picture would do too.
In my photo program I couldn't find the pictures of Rotterdam
that I was looking for, but then I found a magazine
about the harbour of Rotterdam.
There was one I liked ! 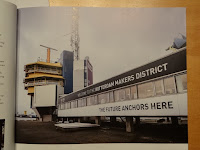 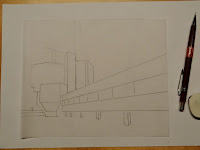 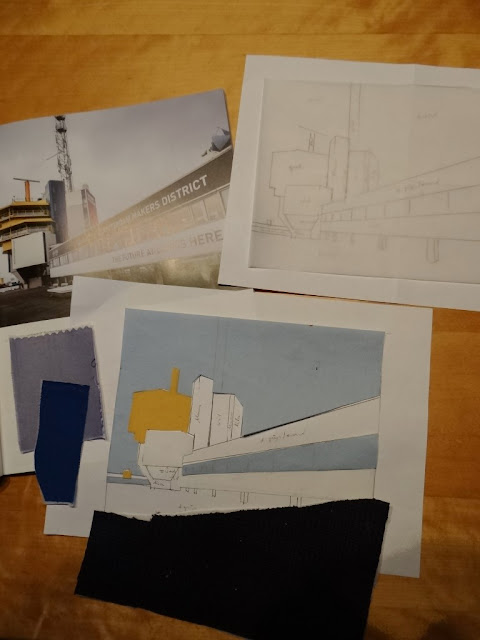 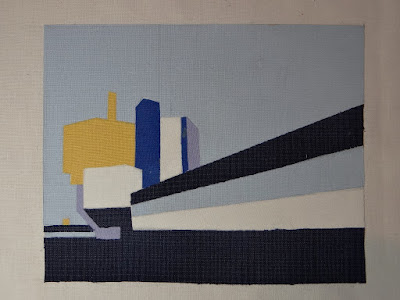 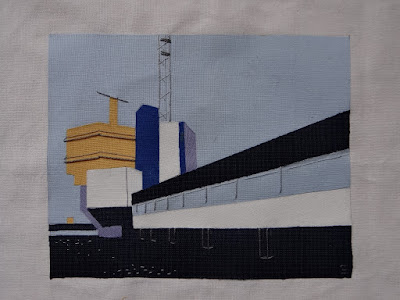 This is the finished piece :
stitched, but not too much
(but I'm still not sure whether it was the best way . . .)